Elegantly laid out avenues, running in east-west and north-south parallels, neatly cornering at children’s park in the west, and gracefully communicating into intervening tee and cross-sections, like eternal asphaltene lovers in bewitchingly black raiments, witnessed on either side by giant oaks, eucalyptus, pine and jacaranda trees, through which the rising sun’s rays filtered in dappled delight, as protea plants and jasmine flowers in the hedges waved fragrantly in gentle morning breeze, heralding dawn of a golden new day on the 14th July 2015. The wintry day unfolded, scaling up from a bone-chilling low of three degrees Celsius to a gradual, relatively bearable high of eleven degrees, as I ventured out towards noon time, for my routine walk around the three mile radius of the villa, located at 8th Avenue, Highlands North, Johannesburg, where I presently am since the first week of July. A tall and stout pine, believed to be nearly a hundred and thirty years old, trimmed like a Christmas tree, a regular shelter for flocks of pigeons and mynahs, stands in stately guard near the gate, and its rustling leaves seemed to whisper stories of few generations of yore. As I paced forward, the gentle breeze propelled me from behind, to ease my steps as it were, in my laboured movement up the steadily sloping road ahead. I walked past houses on either side of the road, with families trooping out of or into some, or dogs peeping through gates and making their displeasure known rather loudly, apparently not taking kindly to my passing by. The children’s park at west end of the road sprawls out in a long open stretch of faded green, equipped with swings, slides and merry-go-rounds, adding to variety of the enchanting landscape. Along the northern part of my place of stay is the route leading to over a century and a quarter old St Mary’s Anglican School, almost brushing shoulders with another institution known as the Waverly Girls High School, established in the middle of last century, located, in close proximity, on exactly opposite side of approach road, lined with rows of jacarandas on both sides, lending a distinctive character, enhancing their profile as two of the oldest educational institutions in Johannesburg. It was, apparently, recess time at the Waverly, so the wards, smartly turned out in their uniforms of navy blue skirts or trousers and white tops, could be seen spread out on the playground, in groups of five or six, animatedly exchanging pleasantries. It was a sight prompting me of my own school days in the serene 1960s, when girls in the convent close to the boys’ school back home, where I was studying, donned uniforms of same colour, in consonance with boys’ uniforms of navy blue shorts, white shirts with house-coloured neck ties, and black shoes going with white socks. 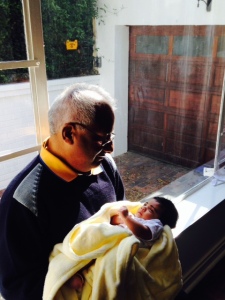 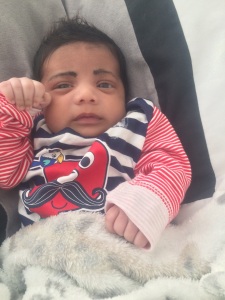 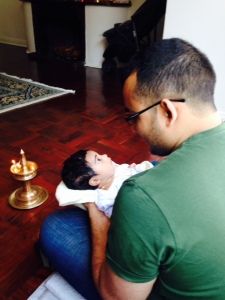 The oaks and eucalyptus stretch their denuded arms skywards, holding promise of wearing new leaves with the advent of spring towards early September; the same assurance is held out by jacaranda trees, waiting for the spring, to adorn themselves with floral crowns of blue and violet, and transform the region into a paradise. Along the walking trail, I can sight quails and hadada ibis, rollers and wood hoopoes, chirping around trees and shrubs as if they too are participants in the day’s chorus. There is a stillness and tranquillity pervading the entire area, the magical spell further enriched by music of birds’ calls, and broken only by muffled sound of occasionally passing vehicles. I continue walking for an hour in silent meditation, in commune with nature, before getting back to the villa to anxiously await good news from my son at the nearby Linksfield Hospital, where my daughter-in-law is undergoing a C section to bring forth new life into the world.
My anxious wait stretched till about 6 pm in the evening, when my son called up to convey good news of new addition to family in the form of a baby boy. My thoughts transported back in time across a little over three decades, to that memorable occasion when I became a father myself, blessed with the son who is now in the same spirit of euphoria, according my wife and myself the privilege of becoming grandparents, creating the torch-bearer who will carry the family legacy forward to another generation. We drove to the hospital around 8 pm, to catch a glimpse of the new born. The baby was fast asleep, unaware of the steady stream of visitors wanting to feast their eyes with pristine vision of new life in nascent purity, as fresh as morning dew on newly sprung blooms. We left the hospital, after a couple of hours, leaving our son, baby, and the ecstatic mother needing few more days at hospital for post C recovery.
It was late in the night; the cold winds and darkness outside, as we drove back home, seemed, to me, to be gradually fading away, to awaken into a new dawn of luminous dreams and aspirations around the precious gift of life presently in our midst, the littlest feet making the biggest footprints in our hearts, as God’s ringingly beautiful reminder that the world will carry on, bringing to mind Dante’s words, “Three things remain with us from paradise: stars, flowers and children”. Life has turned a full circle, with an end signifying another glorious beginning, another ripple in the cosmic ocean, widening ad infinitum. The months already behind us saw several rounds of discussion on preferred name for the new born. Hundreds of names were tossed around, and finally there was consensus building around the chosen name, to be announced at the formal naming ceremony, which, according to our tradition is celebrated on or around the 28th day of the new arrival.
Hours and days swept past in happy succession, the days enlarging into weeks, bringing the prospect of warmth, flowers and flamboyance of fast approaching season of colour, mists and mellow fruitfulness that much more closer. Before one could say, hey presto, the keenly awaited 28th day is upon us as Monday, the 10th August 2015, sweetly close to the proud mother’s birthday falling on very next day, and thus a doubly happy occasion for entire family. The National Women’s Day, celebrated all over South Africa on 9th August every year, commemorating the historic anti-apartheid women’s march of 1956, fell on a Sunday this time, with the respective public holiday, thus, spilling over to today, turning out to be a further blessing, facilitating our celebration without taking the day off. Our 28 days young bundle of joy was formally named Dev, meaning ‘divine’ or ‘God’ in Sanskrit; interestingly, it came as a pleasant surprise to learn that the name also exists in Irish language, where Dev means a ‘poet’. Finally, the little one, bearing the full name, Dev Rakesh, son of Rakesh Rajagopal, and, in turn our new avatar as Dev’s grandparents.
So this is the time and place I presently am at. In the stage where life attains a grandeur of its own, with grand prefixing mother, father, son, and hopefully a daughter, in another similarly graced period not too far away in time, as outlook undergoes dimensional changes, in perceptions and perspectives, in the eyes of the world, ensconced as I am on sublime and exalted pedestal of advancing age and relationships, constantly catching glimpses of a scintillating world of greater magnificence looming in distant horizons. As Dickens stated eloquently in Nicholas Nickleby, “For nature gives to every time and season some beauties of its own…. It is a pleasant thing to reflect upon, and furnishes a complete answer to those who contend for the gradual degeneration of the human species, that every baby born into this world is a finer one than the last”.